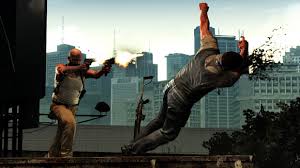 Older gamers will no doubt remember first meeting Max Payne back in 2001 and will have been looking forward to taking another dark journey of bitter revenge with the game’s tragic hero since news of a sequel to 2003’s equally popular Max Payne 2 first came to light.

The good news is that basic gameplay hasn’t changed much from the original game’s “faithful recreation” of the slow motion bullet-time firefights first seen in The Matrix, which together with Max’s ability to dual wield, another relatively new concept in gaming for it’s time, will bring a smile to the face of any long time fan.  As in the prequels, Max is controlled from a 3rd person perspective and, using Rockstar’s GTA 4 engine, can negotiate environments in glorious current gen graphics by running, rolling and climbing with the same silky smooth fluidity as Nico Bellic.  However, the graphics and animation are the only real similarities to GTA though as Max can’t use vehicles, except in set-pieces where he shoots while carried as a passenger, and the game, despite having hidden weapons and secrets for those who like to explore, isn’t set in an open world.

These aren’t issues for Max Payne 3 fortunately as the series has always told a strong story, previously told in static cut scenes illustrated by graphic novel style artwork and speech boxes, but these are replaced in favour of FMV scenes which are presented in a “Man On Fire” style, based primarily in Brazil, and carry the story along in such a compelling way that you don’t mind the linearity of each level.

In a way, sadly, this is also the biggest issue I have with the game – I loved both Max Payne 1 and 2 because at the time they presented something new, unique and enormously fun but after so many years since they first came out, games have progressed in design and scope far more than Max Payne 3.  Despite the graphical improvement this is still virtually the same game in execution as the prequels, which can however be enjoyed as a slice of pleasing nostalgia or as a quick, violent burst of bloody violence (and believe me, some of the slow motion bullet cam hits can be pretty brutal!) but somehow the sum of it’s parts aren’t as good as I remember the first two games being.

The only thing separating the content of this game from it’s prequels is the addition of a multiplayer which, despite being quite good fun, suffers from the same problem as all other 3rd person shooters: your view is often obscured by scenery when your on screen avatar’s isn’t.  Basically, even if your avatar is placed into a position they should have a clear line of sight from, the floating camera behind the character won’t let you see through any scenery between it and objects in the distance.  This is why 1st person multiplayers work so well and even though Max Payne 3 has character creation, online clans, various game modes and levelling up, the multiplayer just isn’t as much fun and my latest attempt to play some free for all on the PS3 found just one other player.

So then, Max Payne 3 is the best in the series so far, looks great and is fun to play but I imagine more so for fans of the original series as newcomers may be disappointed by it’s linear design and disappointing multiplayer. Recommended as a rental or at a budget price, but to be fair – it’s still a recommendation!